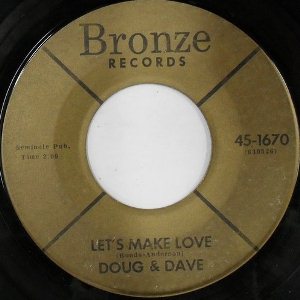 Another of Hines’ seemingly endless supply of tiny imprints.  Bronze is mentioned in the liner notes of the Folkways LPs but the Doug & Dave 45s are the only releases I can find.  Maybe there are a couple of others (1671, 1672…) but with Hines & the haphazard approach to releases, I don’t know.  1673 was also released on the Chicago based USA label.  New Orleans 45s, probably recorded at Cosimo’s and written by Dave Bonds with Doug Anderson.